Many people have asked for an English translation of the article about Shyam Bajaj which was published in Dagsavisen on 25th of June 2011. Hope you will enjoy reading the story about Norge Audio below. Please take into consideration that the article has been roughly translated and therefore the grammar will not be accurate.

He is a small man with big ambitions and infinite love for Norway. In 1976, the Indian Shyam Bajaj was the first supplier of hi-fi equipment in India. It is Norwegian technology and work philosophy that defines the company Norge Audio.

Bombay. Mumbai. The city of dreams. India’s financial capital has many names. Until the middle of the 1800s the city comprised of seven islands. One of them is Mahim, in western Mumbai. If you are travelling by road from north and  toward Mahim you should have patience. Heavy traffic, bicycles, dogs, children, taxi drivers and  booksellers are fighting for space on the road. Huge billboards, pictures of beautiful ladies in saris and known faces from Bollywood take your thoughts away from the chaos for a while. 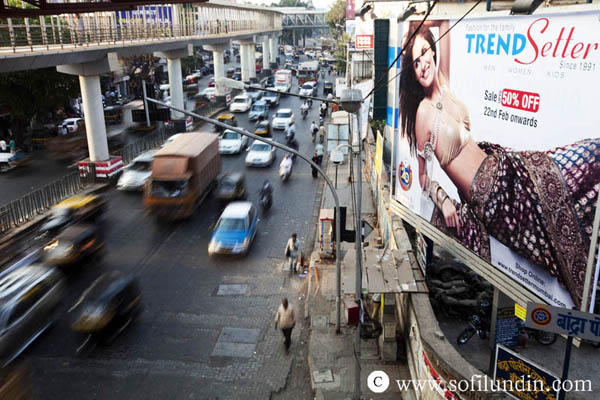 It’s April and the sun is beating down from a cloudless sky. In the middle of a line of honking cars a red Maruti stands in line. Shyam Bajaj (77) has driven the same stretch as long as he can remember. While most people his age have a driver, he prefers to drive himself. On the fourth floor of an old industrial building in Mahim he is running the company Norge Audio since 1976. The old buildings in the area are reminiscent of textile factories, which in the beginning of the 1800s gave tens of thousands of migrant workers employment opportunities. Shyam was smart and invested here many decades ago. Mumbai is one of the world’s most expensive cities. A tiny room in this building costs more than a one bedroom apartment in Oslo. On the way up to the fourth floor I can hear soft music. Inside a sparsely furnished room with blue walls and spotlights in the ceiling, the sound becomes louder. Amplifiers and loudspeakers for all requirements and individual taste are up for display. Norge Audio is primarily known for its good quality and service. Bajaj says this is all thanks to Vebjørn Tandberg.

The letter to the Tandberg

In 1961, when Shyam worked as a radio mechanic, he got a Tandberg tape recorder for repair. It was the beginning of a life dedicated to the Tandberg and Norway.

– My biggest dream had always been to work in a radio factory and I hoped that I would be able to see the world at the same time, says Shyam and smiles when he talks about the letter he sent to Vebjørn Tandberg.

– When I repaired the radio, I had to order parts from Norway. That’s when I decided to submit an application for internship at the Tandberg radio factory. I had of course a fancy formal outfit in the picture I sent with the application, and I guess I have to admit that it was the Indian shirt that made sure I got a positive letter in return, he says, laughing loudly.

Left his wife for Norway

The rest of the family did not share Shyam’s enthusiasm over the letter from Norway. His father was worried about his son’s dreams of travelling the world and insisted that he had to get married.

– At this point of time I had neither wife, nor children in mind, says Shyam and admits that he had to bribe his father. When he married in 1962, it was on condition that he should be allowed to realize his dream. Two years after the wedding, he left his wife in Mumbai and headed for Norway. In 1964, a 27-year-old man with side combed hair stepped into Tandberg’s factory in Oslo. It was not long before Shyam was skiing, eating blood sausage and spoke Norwegian.

The Norwegian work hours meant a lot of free time for a person who was accustomed to long working hours in India. Shyam used the spare time practicing Norwegian in town with strangers and friends.

– I was one of the few Indians in Norway at that time and people were curious about India. I learned a lot about my own country during the two years in Oslo and the Norwegians got to practice their English, he says, smiling at the memories.

At Norge Audio in Mumbai you can hear Indian classical music. An old Tandberg radio is displayed in a corner and in the innermost room the workers are busy sticking white and  green Norge logos on the products. Shyam has just two full-time employees, but the workers have more to do now as the brand has gained international recognition.

– Norge Audio has never been particularly large, but in recent years we have received orders from Canada, UK, Dubai and USA. Customers are quick to share their experiences and therefore we become more and more famous. The quality is high and prices relatively low. Every part is carefully selected to ensure life-long quality. Vebjørn Tandberg taught me to never compromise on quality. I remember that he was stubborn and never gave up. At Tandberg radio factory, they were searching across the world until the correct product was found. Shyam describes Norwegians as extremely quality conscious, and believes that Norwegian products are made according to global standards. 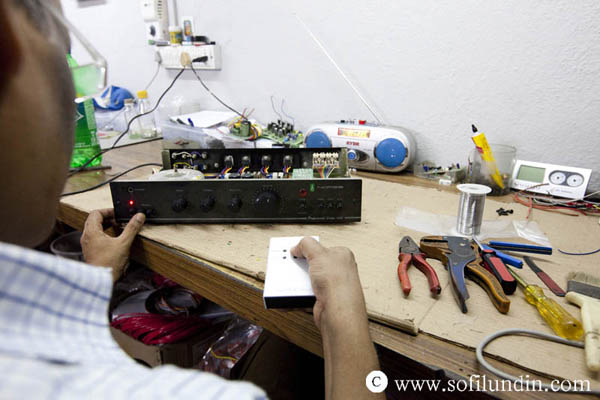 The employees at the factory test the products before they reach the market.

Shyam still remembers the Norweigian he learnt almost 50 years ago and is not afraid to speak. The Norwegian nature is captured in pictures, but it is Vebjørn Tandberg’s work philosophy and the respect he had for his staff that made the biggest impression.

– I have never met a man like Tandberg. Imagine that every morning he went around and greeted good morning to every one of his 600 workers. In Norway, managers show respect to their employees. It is different from India where people are afraid to share their opinion, says Shyam, who says Norwegians are the world’s friendliest people. 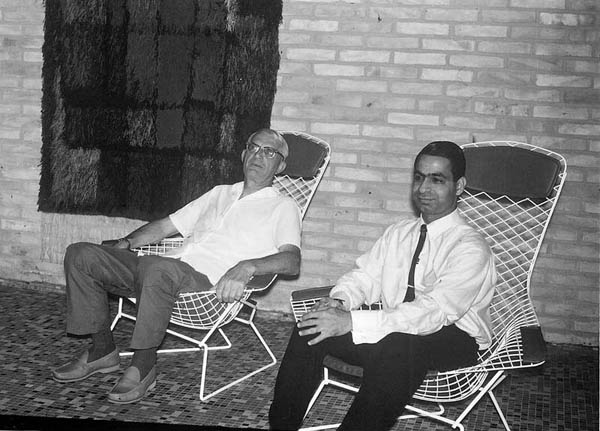 Vebjørn Tandberg and Shyam Bajaj outside Tandberg’s property in Oslo, 1964

A Norway in India

– When my time as an intern was over, Tandberg said something to me which I can never forget. He told me to do something for my country, India. It was with these words in mind I that started Norge Audio. I wanted to introduce Norwegian values, practices, and not least, quality assured products in my country.

Right from its inception in 1967, Norge Audio products were made from Norwegian standards. Shyam is proud that Vebjørn Tandberg gave him permission to create the products from the same concept used in Norway, and he confirms that the well-known Norwegian tape recorders that were made back then still work just as well.

– I have from the beginning used the same philosophy that I learned during my practice in Oslo. Maybe that’s why my staff has stayed with me for more than 25 years. The profits at Tandberg radio factory were reinvested in the business and Vebjørn was known for his humility towards his employees. His commitment to the firm made it a true success, says Shyam, casting a glance towards the room where the workers are about to fix the last part of another Norge-amplifier.

Shyam admits that he is very stubborn and that he never let go of his dreams. In his office the small library is constantly updated with books on philosophy of life, and the audio specialist is trying to be positive in everything he does. His face has naturally got fine lines showing the years that have passed. He is otherwise similar to the pictures from the thick coffee-table book that he has made in memory of the time in Norway. It is not only Shyam who has got wrinkles over the years. The images from the 60’s Oslo show that the capital has changed a great deal too. 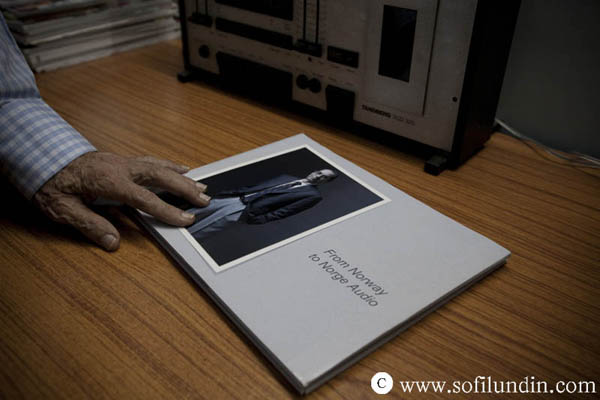 Quality at an affordable price

– It’s hard work, good quality and most of all the love for a country and its people which lies in the name Norge Audio, says Shyam.

Today, his products are sold to both individuals, businesses and famous Indian musicians. Norwegians with taste for good quality order Norge equipment from India. Gaute Johannessen is one of them. Together with some friends he started a band in Mumbai. For Gaute there is no doubt that Norge Audio is worth the money.

– The products are the best you can get in audio equipment for a reasonable price, according to Gaute, who today helps Shyam promoting products in Norway.

From Norway to Norge Audio

Shyam, who today is 77 years, is looking for someone who can take over the business in the future, and confirms that he is not going to give up his life’s work until he finds the right buyer.

– Norge Audio was born from Norwegian values and it is my desire that it should remain so.

Slowly he turns the pages of the book which he has called From Norway to Norge Audio. Two years in Oslo in the 1960s became a lifelong commitment. Today there is a part of Norwegian culture and history in a part of Mumbai and there is nothing to indicate that it is going to disappear ever. 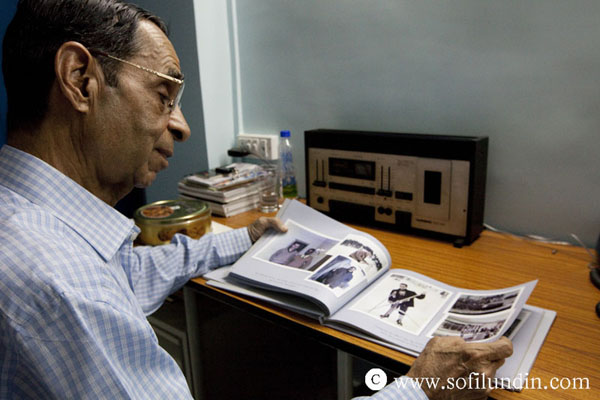 Shyam get nostalgic every time he opens the book. The memories from Oslo are all documented in pictures and Shyam remembers every single one of them.

In the background an old Tandberg radio is displayed.

• 1930: trained as an electrical engineer at NTH in Trondheim.

The business comprises the development, production and sale of speakers and radio receivers.

• 1937-1950: Tandberg is introducing a range of work arrangements, including reduced working week from 48 hours to 42 hours a week, 70 percent salary during illness and three weeks vacation for everyone. Similar provisions are in the Holiday Act of 1947. Four weeks of vacation, statutory with effect from 1965.

• 1951: The company’s first self-owned premises built on Kjelsås in Oslo

• In the years between 1954 and 1969 on the major changes including the establishment of subsidiaries in Sweden, Finland and Denmark. Silver Super 6 FM and Huldra 5 is released and later the first TV receiver. Tandberg move into the premises of 15 000 sq m of basement. Colour television production from 1969.

• 1972: Tandberg radio factory merges with Radionette companies that were known for, among other things, Courier radio. The idea is to strengthen Norwegian radio and television industry, but it turns out that Tandberg acquires a company with both financial and technical deficit.

To see the original article hit the link here!