It’s not everyone who will get an opportunity to discover true friendship with a rat. Even fewer will think about keeping a rat as a travel companion.

I have known a rat called Rani for almost three years. In the beginning we used to fight a lot, but slowly we learned how to tolerate each other. I can be really hot tempered and stubborn at times, and she is the more sensitive kind, but even more stubborn than me. So, you can imagine the kind of arguments we have sometimes.

Rani is not like any other rat I have seen in my life. She is different. Born in a toy store in India she pretty soon realized that the life on a shelf is not how she wanted to live her life. Mistreated by the shop keeper, she decided to escape. That’s when I met her and our journey started. We traveled through crowded market places and busy streets of Pune, got on a train without knowing our destination, and found our way to the mystic deserts of Rajsthan.

On our way we met children who guided us and showed us their way of life and during the journey I realized that the only way to live life is to help others, show respect and be a good friend. That’s what the books about Rani the Rat is all about.

The books show how life can be if you are a little different. Frid Ingulstad, Norway’s best selling writer has written the books and I got the wonderful experience of creating the photographs. The funds from the sale support a kindergarden project in the slum in Pune, through the NGO Fadderbarnas framtid. The books are also for sale in Nota Bene bookstores in Norway and they have been translated into German.

I want to share my great memories from this journey. Here are some pictures from the shooting of the books.

May I present Rani. It’s night in the toy store, she is fed up with everyone and tries to escape. 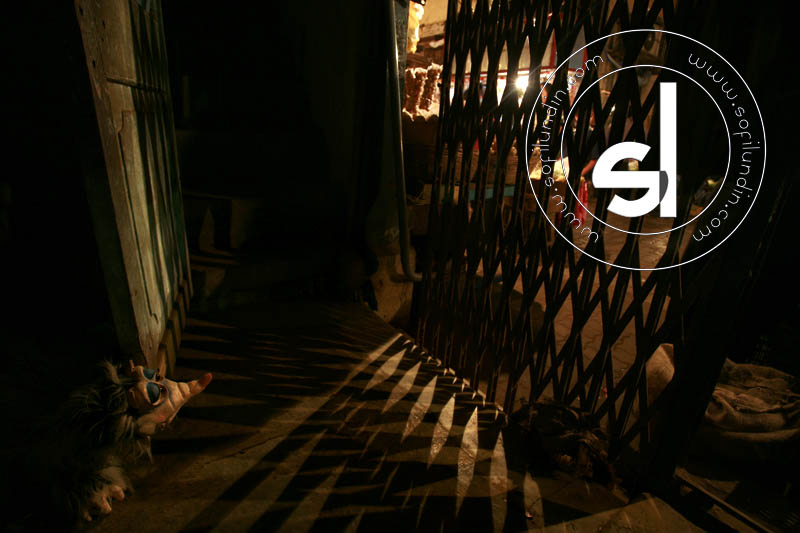 She could not believe that she managed to reach the gate of the store. It’s now or never. Will she dare to sneak out  and face the “real” world outside? 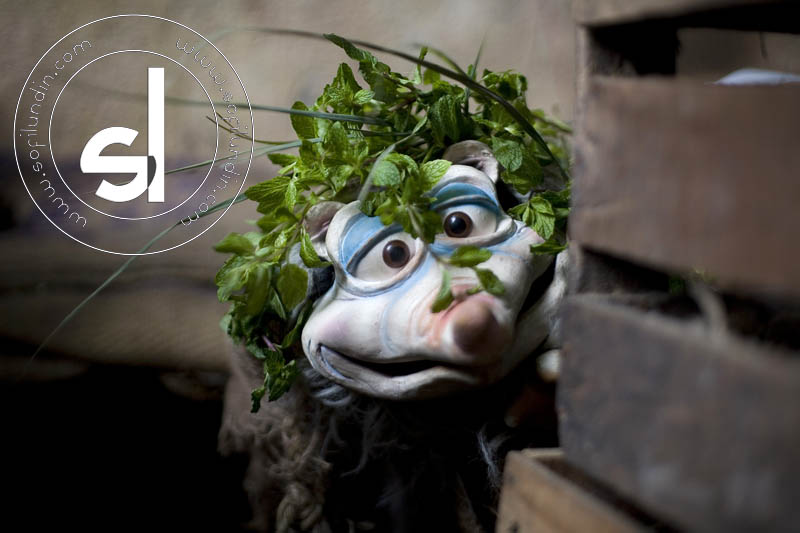 When Rani wakes up the next day she realizes that she has fallen asleep in a pile of Coriander. It’s morning rush at the market place and she hides, so that nobody notice her. 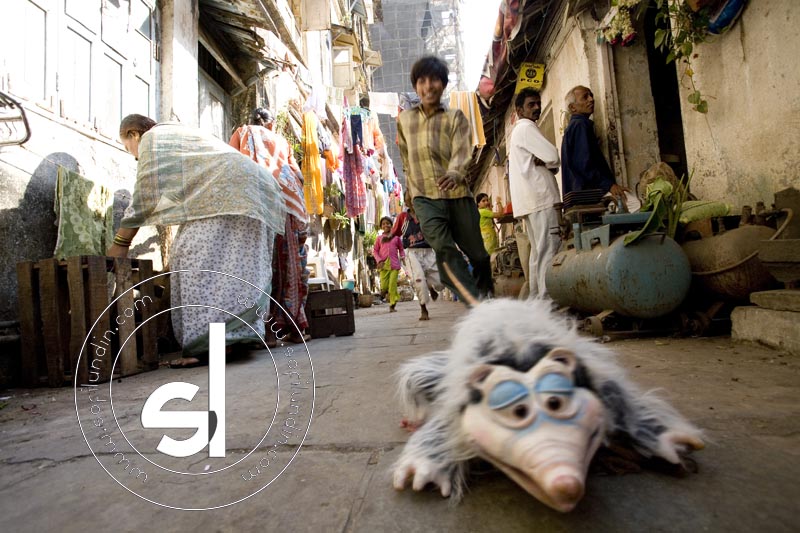 Too late, somebody has seen her. Better run! 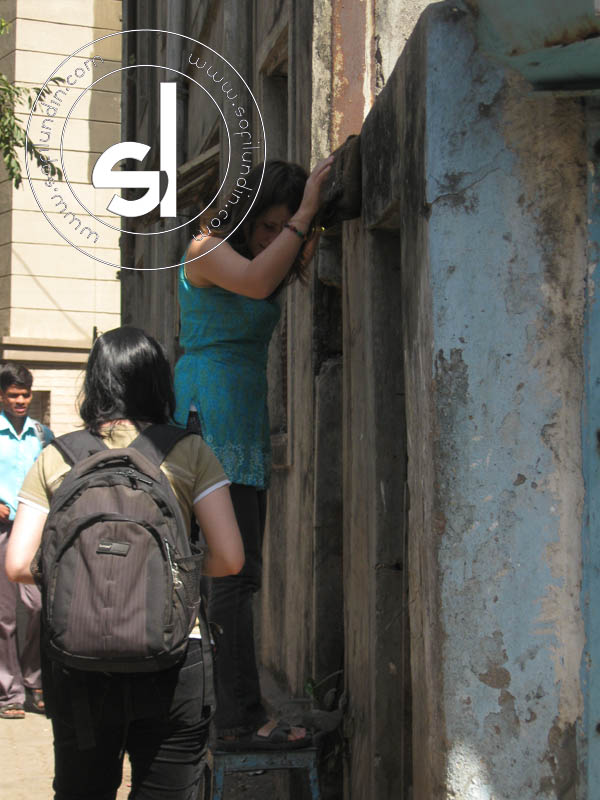 Having a rat as company can lead to tricky situations. Here I’m trying to figure out how to get up on that wall. 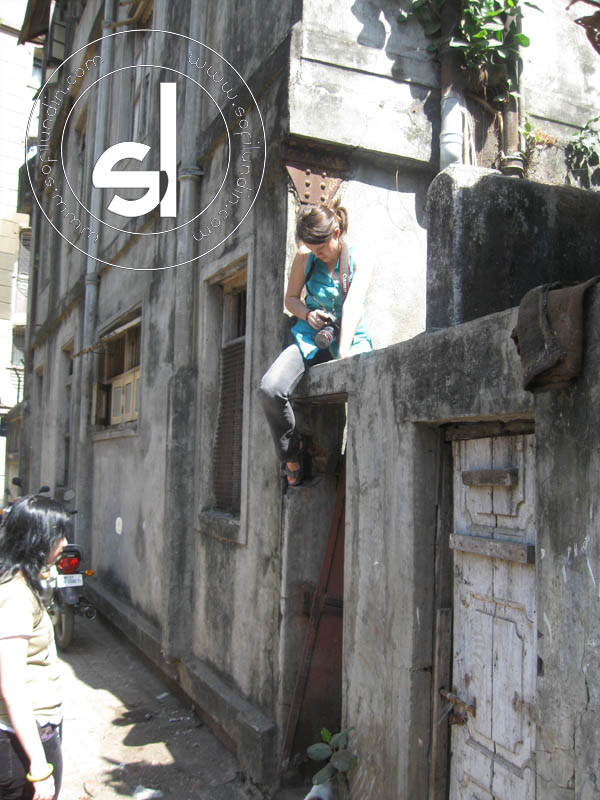 Few moments later, I’m up and safe. What next? 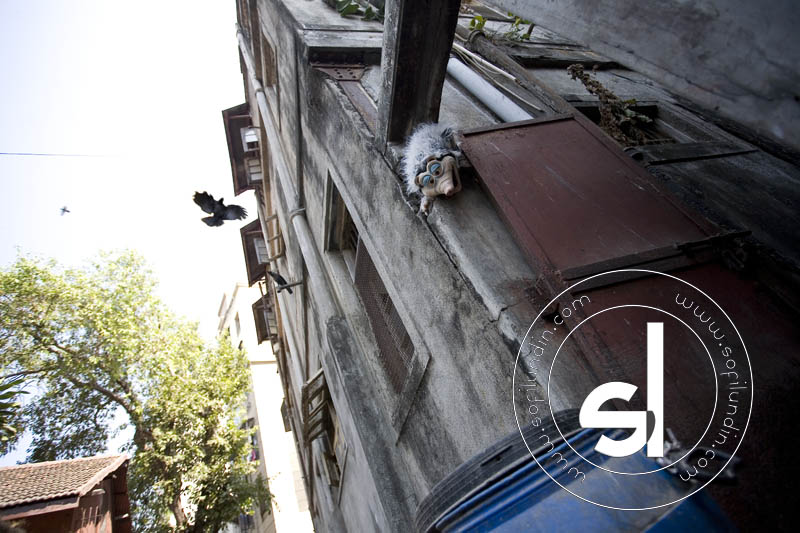 Oh, nooo! Rani takes my example and climbs even higher! 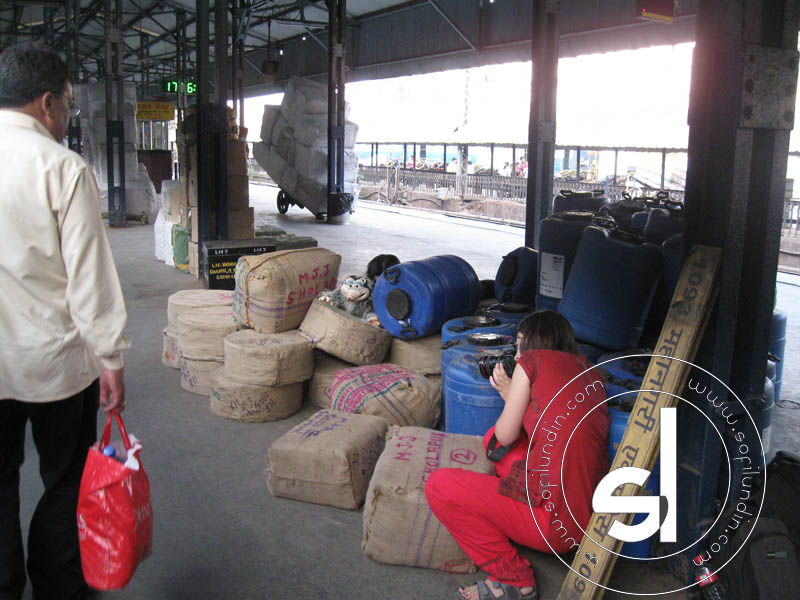 At the train station 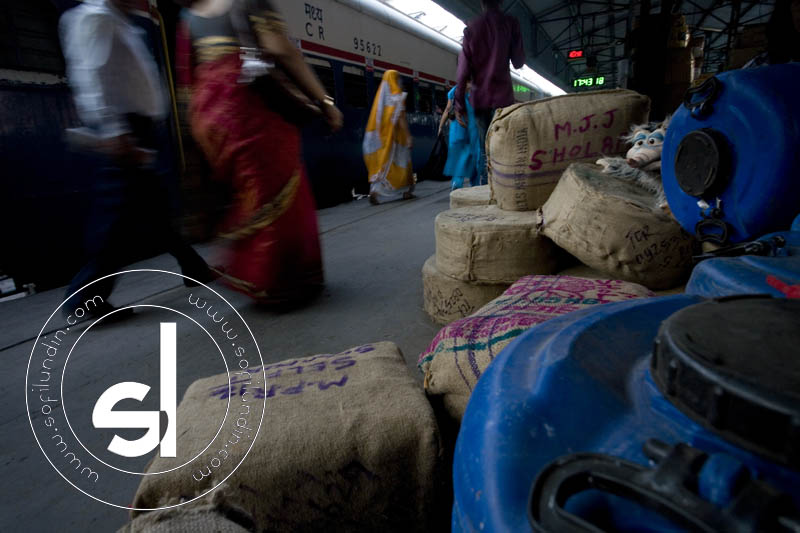 There are so many people. It’s rush time. How will she get into the train and at the same time avoid to get caught. Rats are not traveling very often. 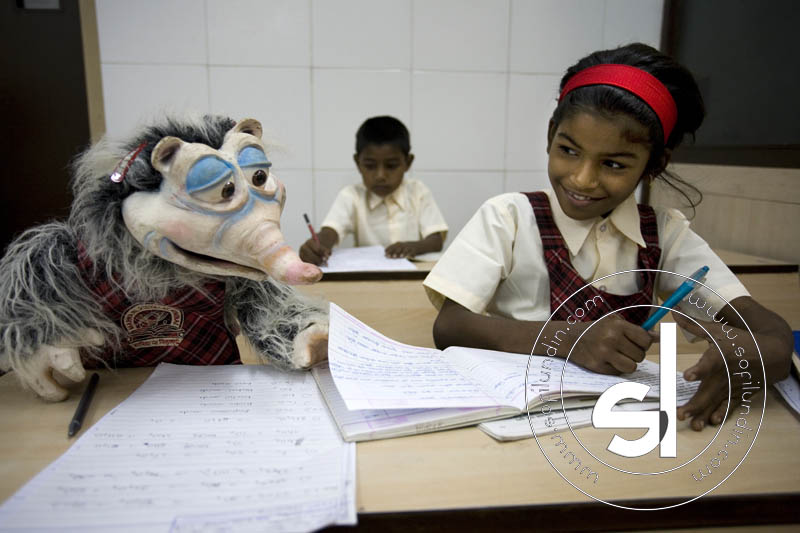 Rani is illiterate. She was not fortunate to learn how to read and write in the toy store. On her journey she meets the girl Sona and their friendship gives Rani a lot of new opportunities. 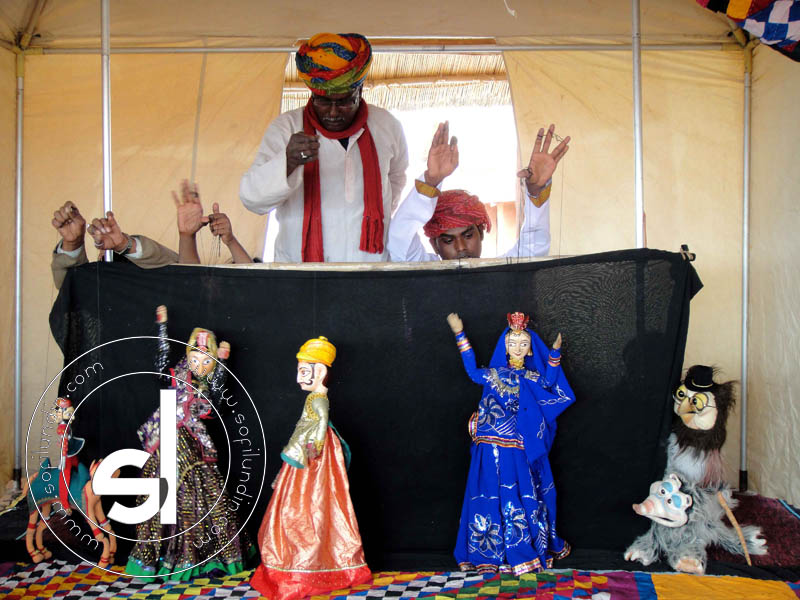 In India there are so many different cultures, and Rani and her friend, Anton the Owl, get to see the amazing colorful state of Rajasthan. Searching for something to eat they land up in the middle of a puppet theatre. Rajasthan is famous for their Katputli shows. 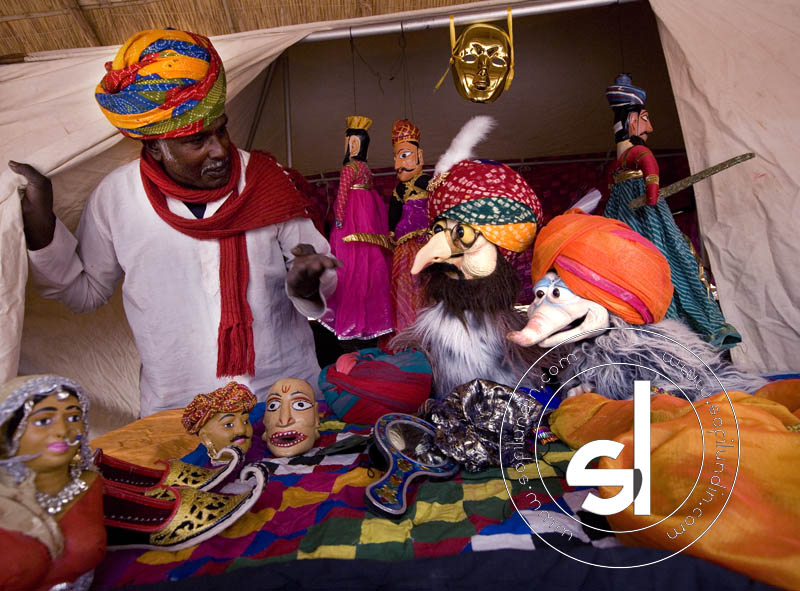 But who could ever guess that they would get so tempted by all the colorful costumes! 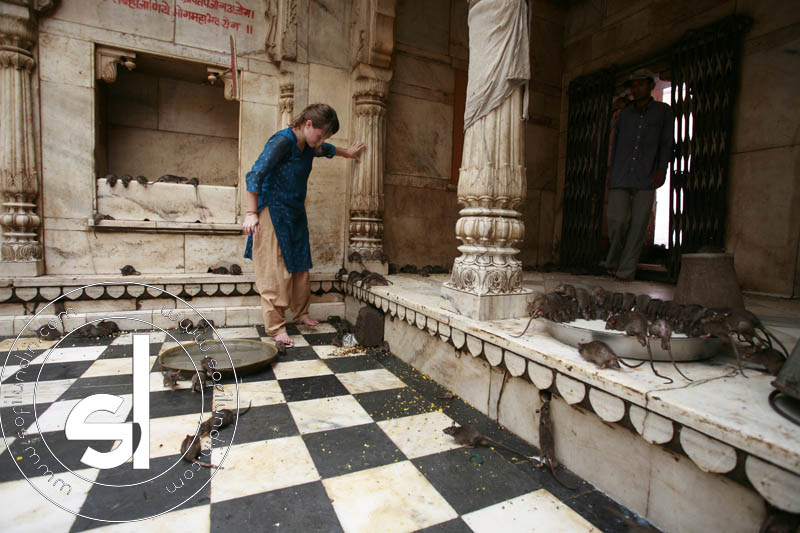 This image is from the rat temple in Karni Mata in Bikaner. Thousands of rats are running freely in there and are worshiped by the visitors, who come from all over the world. 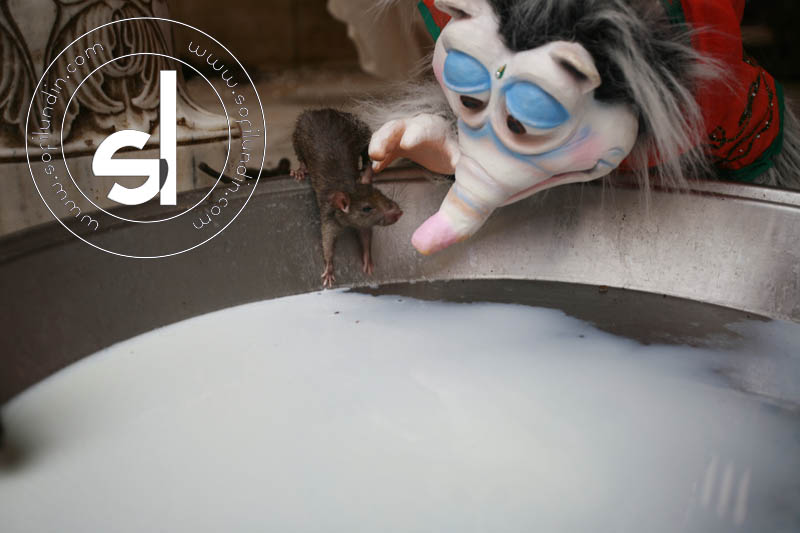 Rani had finally found a place where she could feel at home. She made a really good friend over some sips of milk. 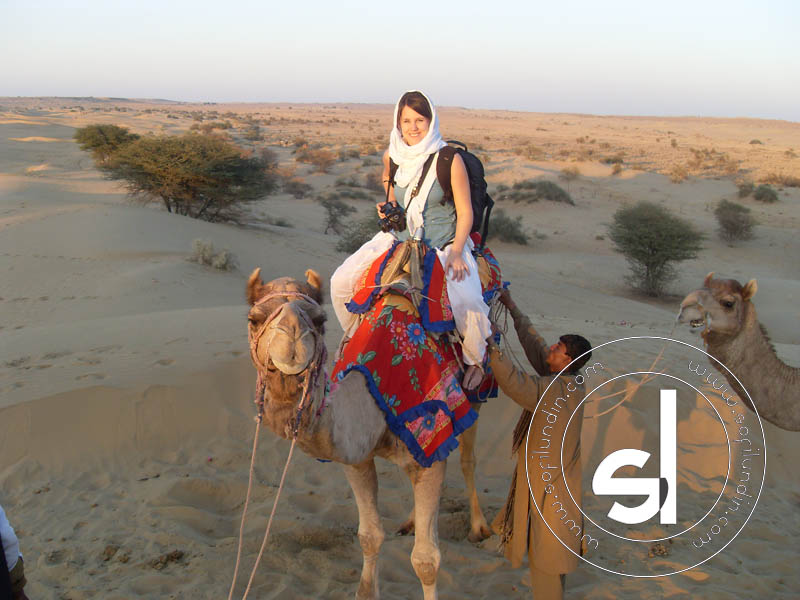 We got company for a while in the desert. But I suspected that even the camels got a bit frustrated with Rani’s stubbornness. 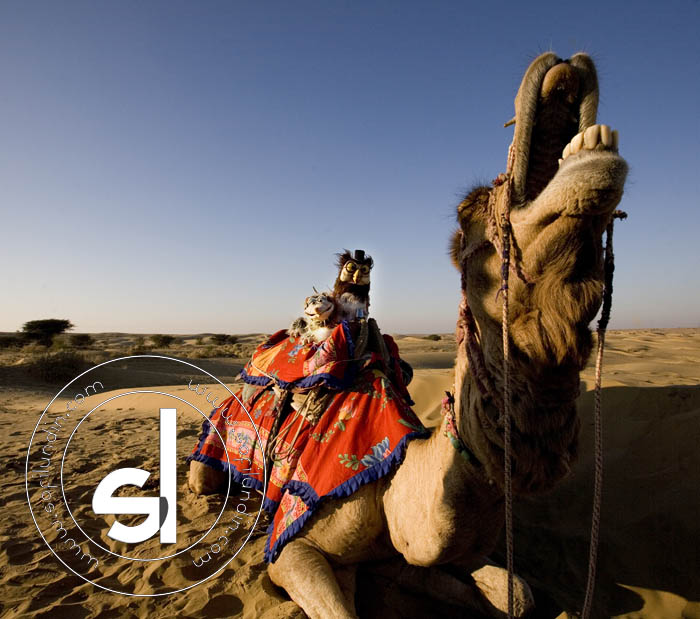 I guess this has to be the last image I display. You can just imagine what happened after this!

Some information: Children just love Rani. The books have become popular in Scandinavia as well as in India. They are made for children from the age of 5 years and make lovely birthday/christmas gift. The third book is yet to be released. Most probably around christmas.

The process of creating the images were a lot challenging at times. Roaming around in India with a camera, you catch attention immediately. Especially if you have a rat as your companion on top of it. The project is a complete low budget project and all the images are created with a Canon 5d, and two set of lenses (Canon 16-36mm f.2.8 and Canon 50mm f.1.4). You don´t necessarily need expensive equipment to achieve a good result. But a great deal of imagination is needed for sure!

Glimpses from the untouched beaches of Goa